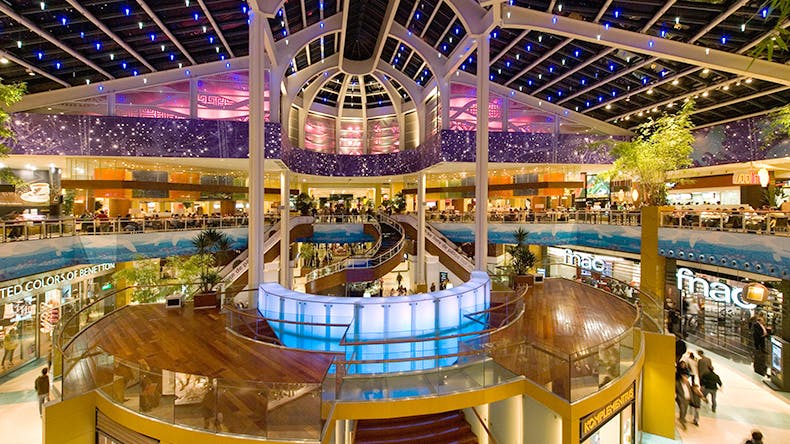 Welcome to the Largest Shopping Centre in Lisbon!

Centro Colombo’s architecture and decoration were inspired by the Portuguese Discoveries, one of the most relevant periods of Portuguese history.

Inspired by the 16th-century architectural elements, Centro Colombo´s decoration recovers one of the most relevant periods in the history of Portugal.

The pavement is a multicolored terrazzo that reproduces with fidelity the 16th-century maps with representations of the traditional caravels and exotic fish from those times.

In terms of layout, the Shopping Centre has two main squares and a main Avenue between both called “Discoveries Avenue” which is paved by the well-known Portuguese sidewalk. From the main and central Square called Cancer Tropic Square where you will find a giant compass rose displayed, you can get to all the smaller Shopping Centre streets which are in turn connected to the Discoveries Avenue – the main Avenue. All these decorative elements of the streets and squares allow visitors to feel as if they are in a true voyage of discovery.

Centro Colombo is in Greater Lisbon are, just 10 minutes away from the City Centre.

Being one of the biggest Shopping Centers of the Iberian Peninsula, here you can will find more that 340 stores at your disposal, including 60 restaurants, 8 cinemas rooms, a health club, outdoor garden, children’s playground, Bowling City and several customer services, such as free wifi and powerbanks.

Centro Colombo has the best offer of shopping services and leisure.

We invite you to come and experience the shopping center. It has everything you can imagine!